Rare, Early Map of Georgia with its Modern Boundary

"The State of Georgia", Carey, Mathew 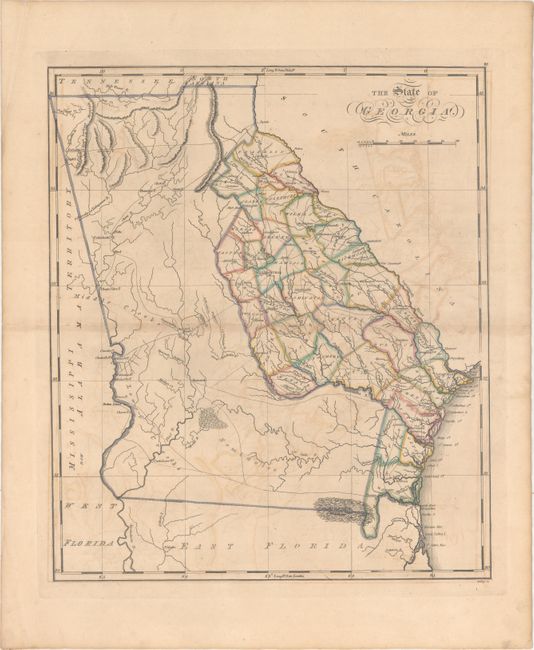 Mathew Carey was a seminal figure in early American publishing; establishing the first publishing firm to specialize in cartography and issuing the first atlas devoted exclusively to American maps. He set up an elaborate cottage system of craftsmen for compiling, engraving, printing, and coloring maps. This practice was emulated by later American cartographic publishers such as John Melish and Henry S. Tanner. The American Atlas concept was also adopted by other publishers in both the United States and Europe.

There are also numerous updates to the county configuration in this late 1818 edition, derived from the Eleazer Early wall map of Georgia, also issued in 1818. New counties have been added, including Wayne from part of Glynn, Emanuel from part of Montgomery, and Baldwin from part of Hancock. In addition, the county lines of every single county have been modified - many greatly so. The map does not yet show several counties that were established in December 1818, including Habersham, Hall, Gwinnett, Walton, Irwin, and Appling, all of which reduced the size of the Indian lands.

The organized portion of the state is confined to north of the Altamaha River and east of the Ocmulgee River. The remainder of the state is designated for the Cherokee, Creek, and Seminole Indians. A number of towns and roads are shown throughout the organized portion of the state, with just a few roads extending to the west, most passing through Buzzard Roost. The Okefenokee Swamp is illustrated along the East Florida border.

An important map for any Georgia collection.

Original outline color with light toning, offsetting, and a short centerfold separation in the left blank margin that has been closed on verso with archival tape.