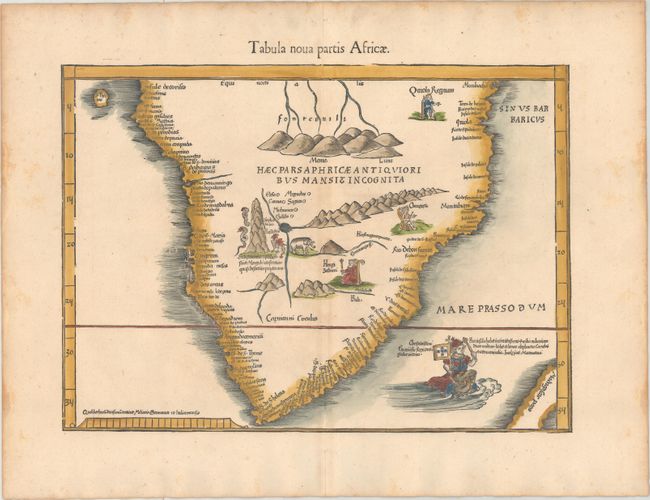 This woodcut map of southern Africa is a reduced version of Waldseemuller's map of 1513. The map extends north to the equator, and includes part of Madagascar. The coastlines are filled with the names of rivers and bays, primarily from Portuguese sources. The Mountains of the Moon (Mone Lune) are shown at top with a notation that they are the source of the Nile River. The interior contains a few additional sparse details, including additional loaf-like mountain ranges, spurious rivers, three kings on their thrones, an elephant, a dragon, and several serpents. The King of Portugal is depicted riding a sea monster while holding the flag of Portugal. This edition was printed by Gaspar Treschel and edited by Michael Villanovus (known as Servetus). Servetus was charged with heresy by John Calvin in 1553, in part due to the text in this atlas. The courts found him guilty and sentenced him to burning at the stake, atop a pyre of his own books, including this atlas.

A nice impression on paper with a bunch of grapes watermark. There is minor toning along the centerfold and light toning and a few small damp stains along the edges of the sheet.