"A New Map of the United States of America by J.H. Young", Cowperthwait, Desilver & Butler 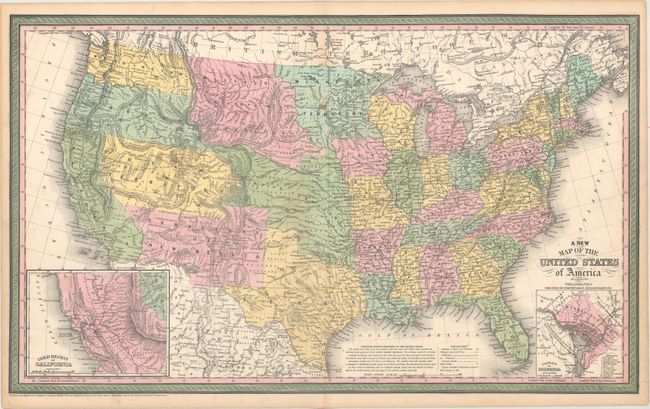 This outstanding map of the United States illustrates early western territorial development with only seven large territories covering the region now making up sixteen states. Indian Territory extends through Oklahoma, Kansas, and parts of Nebraska, Colorado and Wyoming. To the north of Indian Territory are Minnesota Territory and Missouri or Northwest Territory. Washington and Oregon are separate territories, both extending east to the Rocky Mountains at the Continental Divide. Utah Territory encompasses Nevada, and New Mexico Territory encompasses Arizona and parts of Colorado and southern tip of Nevada. A large area in the southern portion of today's Nevada is Unexplored Region. The map is filled with forts, Indian tribes, emigrant roads, early railways, mines, battlefields, salt ponds and a host of other interesting details. Several exploration routes are shown, including those of Fremont, Marcy, and Kearney. Fremont Basin in Utah Territory is bounded by great dividing ridges separating the waters of the Pacific Ocean and the waters of the Great Basin. In the lower corners of the map are insets of the Gold Region of California and the District of Columbia.

The United States map (one of only three double-page maps in this atlas issue) is attributed to Cowperthwait, Desilver & Butler in the title and is undated, but the copyright is 1850 by Thomas, Cowperthwait & Co. This is the first mention in the Universal Atlas series of Cowperthwait, Desilver & Butler as a publishing entity; it would be later in 1854 when the title credit for the atlas would reflect this change. This edition bears no page number, unlike the later edition which has a single "5" page number in the upper right corner. This edition includes numerous proposed railroads with an expanded note on railroads adjacent to the legend, as well as a preliminary depiction of the Gadsden Purchase territory, which is shown between New Mexico and Graham's Line. There is also additional detail in the northwest, including a "Volanic Region" in Missouri Territory.

Original color with a few small stains and light toning along the edges of the sheet.