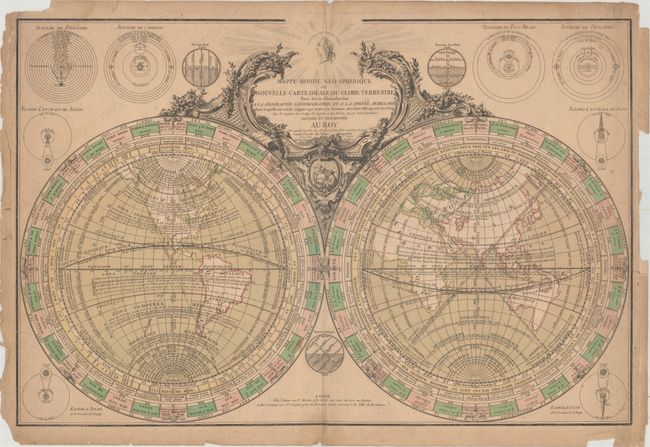 This scarce double-hemisphere map was created by Louis Claude de Vezou, a French geographer, publisher and mapseller, and engraved by Jean Lattre. The focus of the map was to teach basic geography, hydrography, and astronomy, and as such the spheres are surrounded by information. The solar system theories of Ptolemy, Copernicus, Tycho Brahe, and Descartes are shown at top, with diagrams of solar and lunar eclipses in the four corners surrounding the hemispheres. The hemispheres themselves include information on longitude, latitude, antipodes, the ecliptic, the winds, and notations explaining each. The continents are shown in outline with little geographical information with the exception of a few rivers. In North America, the northwest coast is drawn with a dashed line, and there appears to be a River of the West connecting the coast to the Great Lakes. Also of interest is the South Pacific, in which Australia is still depicted connected to both Tasmania and New Guinea, and there are no signs of New Zealand.

Original color on watermarked paper with toning, soiling, and an extraneous horizontal crease that extends through the middle of the map. There are a number of chips and tears in the blank margins, with several tears entering up to 2" into the image, most of which have been closed on verso with archival tape.