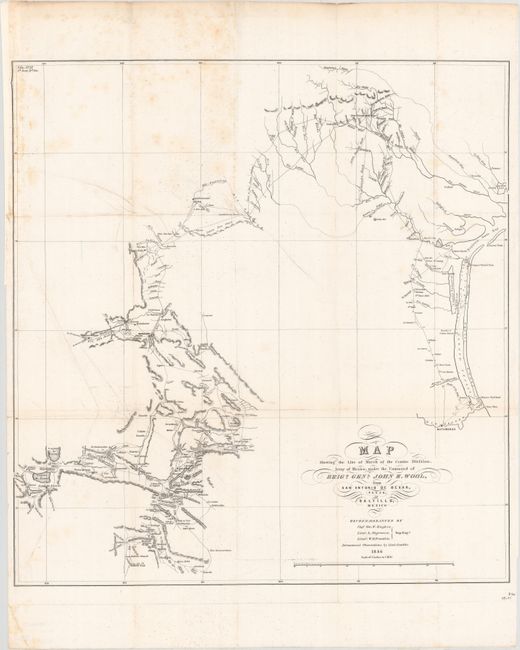 Interesting map of the traveled area from Corpus Christi in Texas to Alamo de Parras in Mexico. This map covers the route of General Wool's military expedition during the Mexican-American War and provided extensive knowledge of an area virtually unknown prior to the war. It details the reconnaissance by Capt. George W. Hughes, and Lieutenants Sitgreaves and W.B. Franklin. The initial campaign strategy in the war with Mexico envisioned a three-prong effort: Gen. Taylor from the lower Rio Grande, Gen. Kearney into New Mexico and California, and General Wool against the state of Chihuahua. Brigadier General Wool led about 3,400 men from San Antonio to Parras, averaging about 15 miles per day. Wool, responding to intelligence, marched his division to Saltillo to join forces with Generals Butler and Worth, and in February of 1847 the combined army defeated a much larger Mexican force under Santa Anna. This terminated the expedition destined for Chihuahua, as the division was merged into the main Army of Occupation. A seldom offered map that was published in G.W. Hughes' 1850 report titled Report of the Secretary of War, Communicating...Operations of the Army of the United States in Texas and the Adjacent Mexican States on the Rio Grande... [half-title]: Memoir Descriptive of the March of a Division of the United States Army, under the Command of Brigadier General John E. Wool, from San Antonio de Bexar, in Texas, to Saltillo, in Mexico...1846.

References: Reinhartz & Colley "The Mapping of the American Southwest", p. 39.

Issued folding, now pressed and mounted on archival tissue. Binding trim at left reinforced with additional paper. Some light foxing at upper left and minor extraneous creasing, as is common with these government reports.