Humboldt's Landmark Map of the Southwest 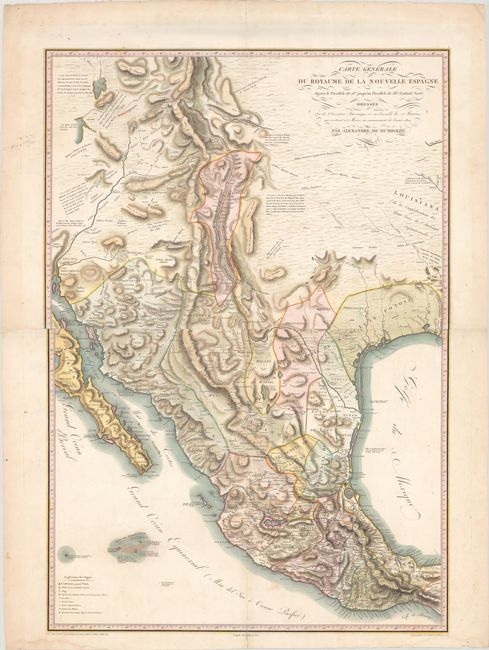 This is the first French edition of Humboldt's landmark map of the Southwest. It was the most important and accurate map of the region to be published at the time, and would remain the standard source until Fremont's mapping of the area in the 1840s. As a testament to the accuracy of the map, contemporaries Zebulon Pike and Aaron Arrowsmith copied copious information in Humboldt's map for their own publications in 1810, one year prior to Humboldt's printed map was released to the public.

Humboldt, a world-renowned naturalist and explorer, spent 5 years (1799-1804) traveling in South and Central America collecting data on plant and animal life. In 1803, he arrived in Mexico City to compile his findings into Essai Politique Sur le Royaume de la Nouvelle-Espagne..., and it is during this time that he constructed this map. Humboldt's reputation provided him access to a vast number of documents and maps held in the local Spanish archives, including important accounts from Costanso, Mascaro, Alzate, de Fer, Urrutia, Pichardo, Lopez, Carces, Font, Venegas, Lafora, and Miera. In fact, the northern third of the map is based almost entirely from Miera's Escalante earlier map (1777). Cartographically, the map covers the entire American Southwest and Mexico from Natchitoches west to Baja California and from Utah south to Tehuantepec. In addition to the map's superior accuracy, it is notable for introducing the concept of hachuring (orthographic projection) to convey topography. However, despite these improvements and innovations, Humboldt's map still contains a few errors including a depiction of the mythical Lake Timpanogos, along with several notes concerning its sources. Humboldt himself acknowledges the incomplete information and that "it must be allowed that all that part of the west of North America is still but very imperfectly known." Printed on two sheets and joined.

A seminal map of the American Southwest which Streeter describes as "one of the six most desirable maps of Texas."

A crisp impression with minor soiling mostly in the blank margins and short fold separations at center and in the top and bottom blank margin that have all been archivally repaired on verso. Two small damp stains and several tiny edge tears are all confined to the blank margins.