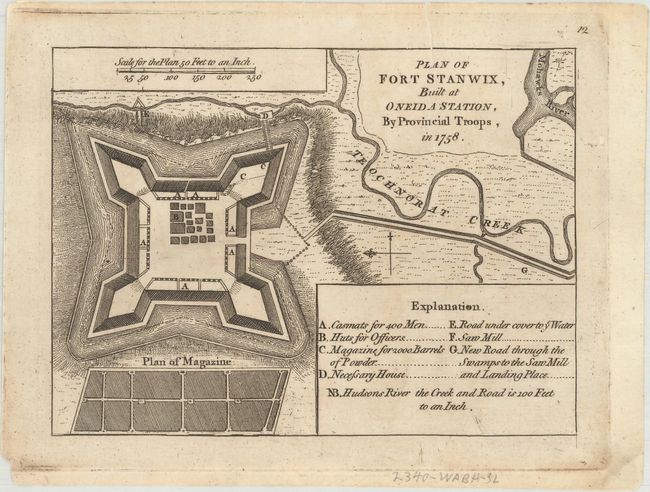 Publication: A Set of Plans and Forts in America...

This bird's-eye plan depicts the star-shaped Fort Stanwix, at the location of present-day Rome, NY. The fort was constructed under the direction of British General John Stanwix in 1758 during the French and Indian War. The fort was strategically located to guard the Oneida Station, an important portage connecting the Atlantic seaboard to the interior of the continent through the Hudson and Mohawk Rivers to Wood Creek and ultimately Lake Ontario. The plan shows buildings in the fort, roads, the magazine, and the Mohawk River. A small compass rose orients north to the left, and a lettered key identifies locations on the plan.

John Rocque was born Jean, the son of French Huguenot emigrant parents, who settled in London when he was quite young. Rocque is known for his survey and mapping of London, particularly the 16-sheet city plan he published in 1746, considered to be the finest depiction of London at that time. In 1751 he was appointed Chorographer to the Prince of Wales. His business was destroyed by fire in 1750, but he continued afterward and maintained the success of his business. His wife, Mary Ann Rocque, took over the business upon his death in 1762, finalizing publication of A Set of Plans and Forts in America. The work was first published in 1763, with a second edition appearing in 1765, with the only change being the addition of plate numbers. A Set of Plans and Forts in America included 30 maps and plans of important forts and other locations important during the French and Indian War, which had just concluded. Peter Andrews, also known as Pierre Andre, worked with Mary Ann Rocque and engraved some (if not all) of the plans in the work; his imprint appears on four of the plans.

A nice impression on watermarked paper with an archivally repaired tear that enters image 1.25" at top (in title cartouche), a few tiny tears in top blank margins, and light marginal soiling. Remnants of hinge tape on verso.