Important Revolutionary War Map of the Battle of White Plains

"A Plan of the Operations of the King's Army Under the Command of General Sr. William Howe, K.B. in New York and East New Jersey...", Sauthier/Faden 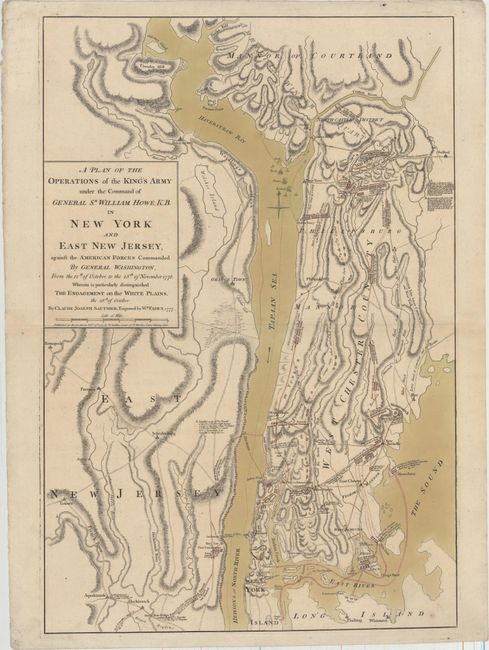 This important Revolutionary War map depicts the battle of White Plains, which was waged on October 28, 1776, as well as the events leading up to the battle and the aftermath. It illustrates the region surrounding the Hudson River from New York City and the East River to the Croton River. This map, derived from a manuscript map by Claude Joseph Sauthier, is filled with incredible detail of the positions and movements of the British and Continental armies from October 12 to November 28. Incredibly, this map was published in London by William Faden just 3 months after the events took place.

After being forced to retreat from Manhattan by General William Howe, General George Washington moved his troops north, eventually making their way to White Plains in late October. Anticipating the Continential Army's retreat, Howe sent regiments by ship to Pells Point and Myers Point, marching them northward to White Plains. Washington failed to establish firm control over the high ground, and Howe successfully gained control of White Plains, forcing Washington's army to retreat further north near North Castle. Rather than following, Howe redirected his efforts to eliminate Continental forces from Manhattan, which he also completed successfully in the Battle of Fort Washington on November 16.

Published by Faden on February 25, 1777. This is the second state with three British ships (Tartar, Phoenix, and Roebuck) near the entrance of Croton River, with a dotted line showing their course up the Hudson River.

Full original color on paper with watermarks of a Strasburg Lily and "WF" and a couple of small, insignificant spots. There are professional repairs to short centerfold separations that enter about 1" into image at right and left.