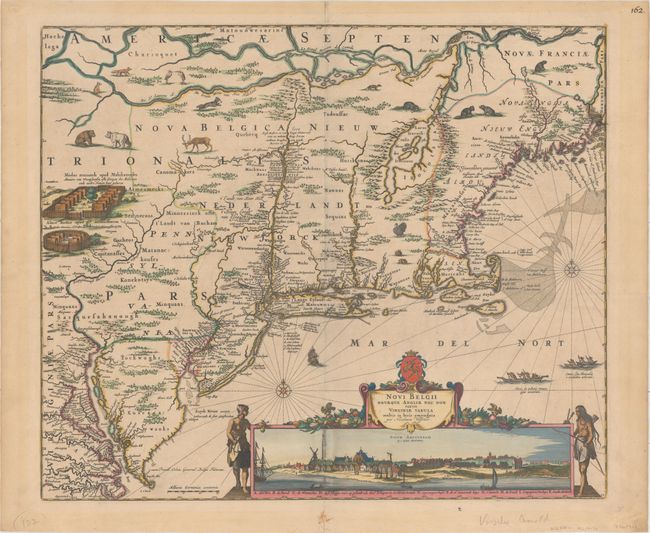 This landmark map, one of the most important in the Jansson-Visscher series, formed the basis for the mapping of New England for nearly one hundred years. It is based on Jansson's map of 1651 with Visscher's significant addition of a view of New Amsterdam, the Dutch settlement on Manhattan Island. This view is one of the earliest images of New York City showing the southern tip of Manhattan Island as a small settlement dominated by a Dutch fort and the buildings of the Dutch West India Company. This fascinating view is based on the Albertina drawing, discovered in the Albertina Collection of the Austrian National Library in 1991, and is believed to have been used to illustrate the text of Adriaen van der Donck's Remonstrance. The Albertina drawing depicts the struggling Dutch colony of New Amsterdam circa 1648, and was designed to substantiate Van der Donck's plea to the States-General for additional support for the colony. Although the buildings, structures, and layout are nearly identical in Visscher's view, the appearance of the town was beautified to accomplish a very different goal: encouraging emigration to the new colony.

The cartography is nearly identical with Jansson's map, which in turn borrowed heavily from the Blaeu map of 1635 including some of its most glaring errors. Lacus Irocoisiensis (Lake Champlain) remains radically misplaced to the east of the Connecticut River, the St. Lawrence River (also called the Grand River of New Netherland) and Ottawa River are intertwined, and the coast of New England is imperfectly mapped. The influence of the Dutch in the region over that of the English was also grossly misrepresented in this map, exemplified by the large lettering of Nova Belgica Nieuw Nederlandt compared with the diminutive lettering of Nova Anglia Nieuw Engelandt. In addition, the Director General of New Netherlands, Peter Stuyvesant, had signed a treaty in 1650 with the English, ceding much of Long Island to the English and establishing the border between their territories to a line extending north from the Greenwich-Stamford area. This exaggeration of Dutch strength in the New World was again an attempt to lure colonists. However, the encroachment of numerous English settlements on Dutch territories -- such as Stratfort (Stratford) and Stamfort (Stamford) in Connecticut and Greenwyck (Greenswick) and Heemstee (Hempstead) on Long Island -- is perhaps fore-shadowing of the Dutch losing control of New Amsterdam in 1667. Visscher's map was certainly an improvement over Jansson's, reflecting the increase in Dutch knowledge of the geography of the vicinity of Manhattan and Long Island, the settlements on the Delaware, Hudson and Connecticut Rivers, and those along the Massachusetts coast. The map was so highly regarded that it played a part in colonial boundary disputes; between New York and New Jersey and again between Pennsylvania and Maryland. This is the fourth state, with the addition of Philadelphia and several other place names, as well as a notation of Privilege added to the left of the view.

Excellent impression and color with mild toning and light soiling along the centerfold at bottom. A tiny hole in the view of New York and a 1.5" centerfold separation at top have been professionally repaired. There are remnants of hinge tape on verso and light mat burn well outside the image. Very nearly an "A" example.