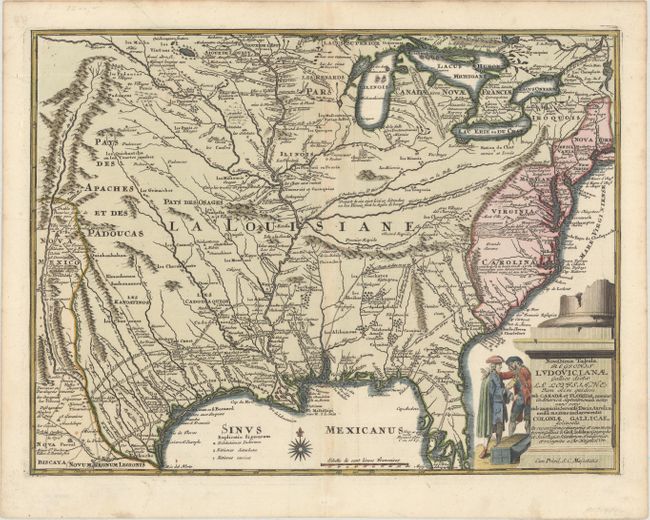 This uncommon map is based on Delisle's seminal charting of the French possession of Louisiana that drew together the cartographic work of the previous half century. It presents a detailed view of the Gulf region and the Mississippi, and the exploration routes of De Soto, Cavelier, Tonty, Moscoso, and Denis. Numerous forts are shown throughout. At the far west is the Rio Grande with the settlements of Santa Fe, Los Taos, S. Felipe, and Albuquerque nearby. The large figurative cartouche shows two gentlemen negotiating a chest of coins for a stock certificate, in reference to the famous Mississippi Bubble investment scheme. The impetus for colonial expansion in the Americas came not just from governments, but also from private investors willing to invest for future profits from undiscovered riches in these new lands.

John Law, a Scottish financier, established the French Compagnie de la Louisiane d'Occident in 1717 and was granted control of French Louisiana. Law developed an elaborate plan to exploit the fabulous resources of the region, which quickly gained popularity, and people rushed to invest. The term millionaire was coined during this time to describe these newly rich folk. Share prices opened at 500 livres and rapidly rose to 18,000 livres. At this point, speculators cashed in, caused a run on the shares, and the company went bankrupt. As a consequence of the failure, confidence in other similar companies failed, such as the South Sea investment company in England and thousands of individual investors across Europe were ruined.

A crisp impression with light toning along the centerfold and a few tiny centerfold separations that have been repaired on verso with archival material. A light printer's crease runs adjacent to the centerfold.