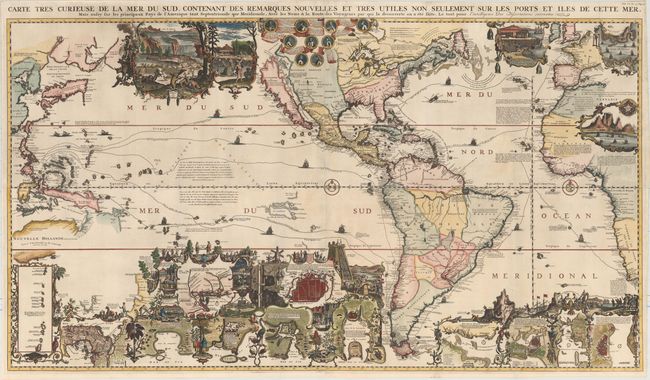 This spectacular wall map is richly engraved in the tradition of Dutch cartography. Although the focus of the map is the Americas, it extends to include all of the Pacific with the East Indies and Japan, and all of the Atlantic with a good deal of western Europe and Africa. The map is based on De Fer's map of 1713 and appeared in the sixth volume, devoted to the Americas, of Chatelain's monumental work, Atlas Historique. California is shown as an island on the second Sanson model with an indented northern coast, numerous place names, and a notation alluding to the controversy provoked by Father Kino's map of the peninsular form. As such, this was one of the first European maps to question the myth of the island of California.

The Great Lakes are well defined in North America, which is devoid of geographic detail with the exception of major rivers and a few place names, including a few missions and forts. The unknown northern reaches of the continent are cleverly hidden with notes and decorative medallions, and the northeastern US and Quebec appear quite elongated. In the South Pacific are other newly discovered lands, including the Solomon Islands positioned south of California, several partially delineated islands labeled "land seen but unknown," and the incomplete coastlines of Australia, New Zealand, and Tasmania.

Above North America are 9 medallions depicting explorers notable for their voyages to the New World, including Columbus, Vespucci, Magellan, Le Maire, Drake and Dampier. The tracks of these explorers are traced throughout the oceans along with depictions of their ships. The map is filled with vignettes enclosed in rococo borders providing a panorama of the New World and illuminating key geographical locations, the native culture, and indigenous flora and fauna. The waters throughout the southern hemisphere feature inset maps and town plans, including the Mississippi Delta, the Isthmus of Panama, the Rio de la Plata, Acapulco Bay, Mexico City, Havana, and Veracruz. The vignettes include a spectacular view of Niagara Falls with the famous depiction of a beaver colony, a scene of the cod fisheries in Newfoundland, Native Americans hunting, and the rituals of the Aztecs and Incas including human sacrifice, mining and sugar operations in South America. The insets are surrounded by images of animals and plants native to the New World, such as an opossum, a muskrat, a tobacco plant, and a pineapple.

On four sheets, joined. One of the most spectacular maps of the Americas ever published.

Superb impression and color on clean and bright watermarked sheets. Issued folding and now flattened with one 1/2" fold separation just north of New Guinea that has been archivally repaired and a few tiny tears and minor creases along the edges of the sheet, well away from image.