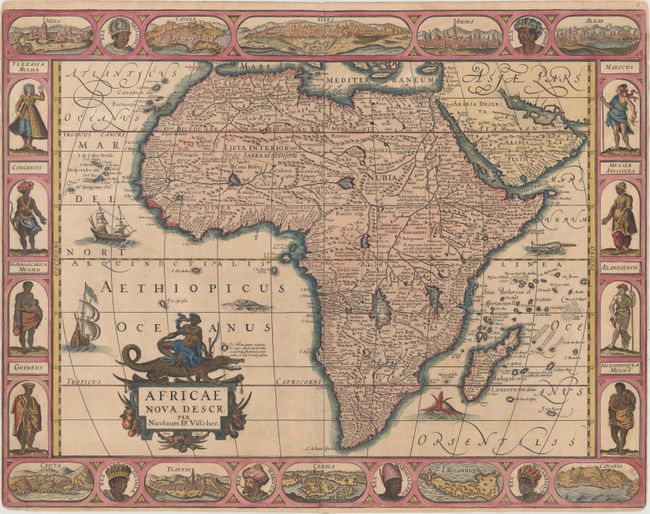 This is a very rare state of Pieter van den Keere's map of Africa, which was first published in 1614 and was the first folio-sized map of the continent with a carte-a-figures border. Claes Jansz. Visscher acquired the copperplate prior to 1631 and completely re-engraved the title cartouche to an African woman sitting on a crocodile to represent the continent. Van den Keere's name was removed and replaced with that of Nicolas Visscher, and was published in 1631, 1636, 1648 and 1652. The cartography on the map remained the same through all states and was based on Jodocus Hondius' map of 1606. Two large lakes south of the equator are shown as the source of the Nile River, and the Niger River flows straight west to the Atlantic. Two large galleons and three fierce sea monsters fill the oceans. Flanking the sides of the map are costumed African figures from Morocco, Madagascar, Guinea, Abyssinia, and Mozambique, among others. At top and bottom are town views interspersed with portraits of famous kings of Africa. The town views are based on those from Braun & Hogenberg's Civitates Orbis Terrarum and include the Mine at St. George in Guinea, Tangiers, Tunes, Amara, Algar, Cueta, Tsaffin, Cefala, Mozambique Island, and Canaria. A striking and rare map.

A dark impression with old color that has been refreshed, light toning, and two small worm holes along the neatline at bottom. There are two 1/2" tears at bottom that have been professionally repaired. Narrow margins, as issued.