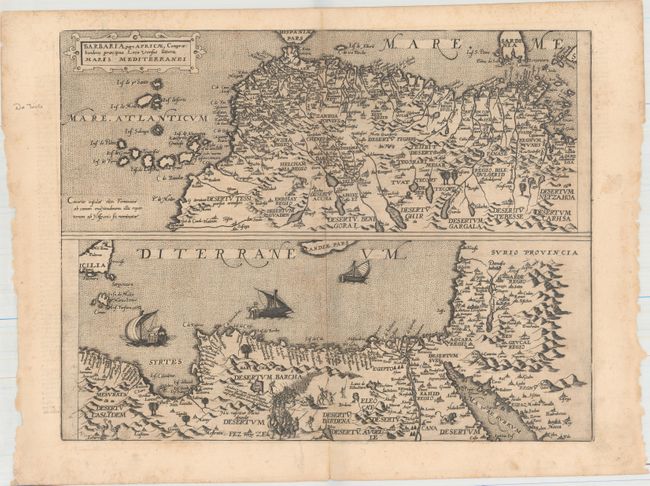 This handsome sheet depicts the northern parts of Africa in two sections. The top section spans from the Canary Islands to Tunisia; the bottom section covers Libya and Egypt and extends to include parts of the Middle East. Deserts, towns and cities, rivers, lakes, islands, and more are identified. Tangier (Tangia), Alexandria (Alessandria), Cairo (Cayro), Damascus (Damasco), and Mecca are among the cities located. Sicily and parts of Sardinia and Crete are shown, and three ships appear in the Mediterranean in the bottom section. Small illustrations of palm trees, ostriches, a lion, an elephant, and a long line of soldiers pepper the continent.

Gerard de Jode published several important maps including Ortelius' famous 8-sheet map of the world in 1564. His major atlas, Speculum Orbis Terrarum was a commercial failure because his rival, Abraham Ortelius, was able to obtain a monopoly for eight years at the same time De Jode was preparing the publication. After Gerard's death, his widow and son enlarged the atlas and re-issued it in 1593. On the death of Cornelis, the copper plates were sold to J. B. Vrients, who acquired them merely to stop their re-issue, as he had also acquired the Ortelius plates. De Jode maps are rarely offered on the market.

A dark impression on a watermarked sheet with light scattered foxing. There is a short fold separation in the bottom blank margin and small chips along the sheet's edges.