"The VII United Provinces Corrected from the Observations Communicated to the Royal Society of London, & ye Royal Academy at Paris...", Senex/Price 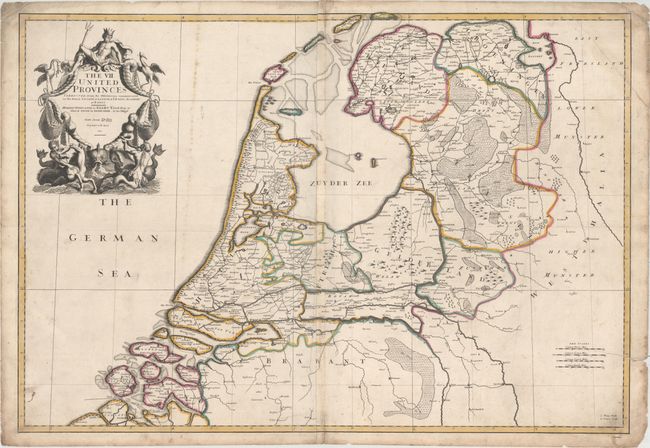 This splendid map shows the seven United Provinces that comprised the Netherlands in 1709, in the reign of Queen Anne in England. The coastline is drawn in detail with its harbors, inlets, bays and islands. The Zuyder Zee is depicted as a large body of water in Northern Holland, filled by the sea with Amsterdam located on its southwestern shore. There is very good detail inland of cities, towns, roads, forests, hills, rivers and canals. The North Sea (here called the German Sea) is filled with a magnificent title cartouche surmounted by King Neptune, with sea-horses, mer-men, a sea monster, and fishing nets full of fish below. The title also includes a dedication to Elihu Yale Esq. (1649-1721), an English merchant and philanthropist. Although Yale was born in Boston, he spent his career in the service of the East India Company, where he made a fortune in India. He made many financial donations to Yale University, which was renamed in his honor in 1718. Yale retired to England during his later years, where he remained until his death in 1721. On two sheets, joined.

John Senex was a surveyor, engraver, bookseller and publisher in early 18th century London. During the early part of his career, Senex was in business with publisher Charles Price in London. When they parted ways in 1710, Senex began working with publisher John Maxwell until 1714, when they jointly published The English Atlas. This example bears the imprints of Senex and Price in the title cartouche, with Price credited as the draftsman and Senex as the engraver.

Original outline color on watermarked paper with soiling, a 2" centerfold separation at top, and several printer's creases and extraneous creases. There are two tears at right (2.5" and 4.5") that have been professionally repaired.