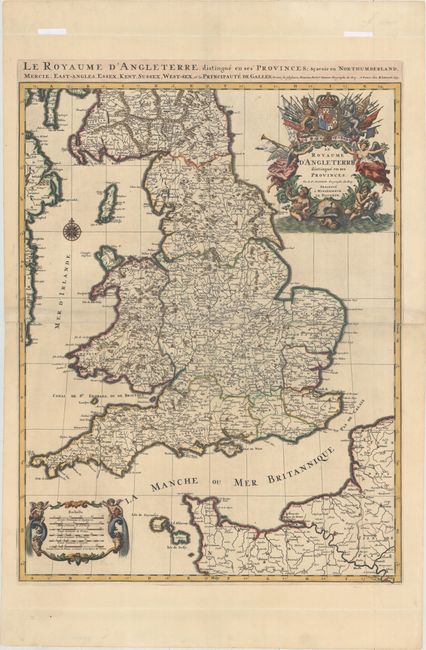 This is the first state of this handsome map of England and Wales. It also includes a small portion of Ireland's eastern coast, southern Scotland, the Channel Islands, and a stretch of French coastline. England and Wales are divided into counties, and several towns, cities, rivers, and topographical details are shown. The stunning decorative title cartouche features the United Kingdom coat-of-arms with a banner underneath reading Je Maintiendray ("I will maintain," which is strangely enough the motto of the Netherlands), along with trumpeting angels, mermen, and symbols of military might. A second cartouche flanked by putti encloses the six distance scales. A compass rose capped with a fleur-de-lis appears in the Irish Sea. Jaillot, in partnership with the sons of Nicolas Sanson, re-engraved Sanson's map on a larger scale in the 1680s. This particular map was published 20 years later, and while based on Sanson's cartography (who is credited in the cartouche), it is a Jaillot composition. There is an alternate title running along the top neatline: Le Royaume d'Angleterre, Distingue en Ses Provinces; Scavoir en Northumberland, Mercie, East-Angles, Essex, Kent, Sussex, West-Sex, et la Principaute de Galles. Printed on two sheets that have been joined.

A dark impression with attractive later color and minor soiling along the joint. There are horizontal creases in the wide margins at top and bottom, well away from image, and remnants of hinge tape on recto at top.