First State of Morden's Rare Map of the American Colonies 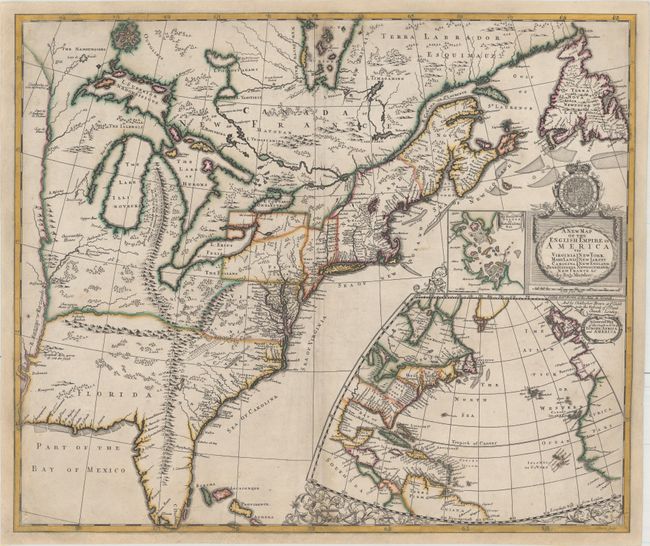 This is a very important and rare map of the eastern part of North America with interesting geographical misconceptions. One of the most prominent features is the trident-shaped mountain range extending from Michigan to Florida. In the area of the Carolinas, the mountain range extends west nearly to the Mississippi River, and northeast into the Appalachian mountains.

The map closely follows Richard Daniel's map of 1679 (A Map of Ye English Empire in Ye Continent of America), which Morden later published with his own imprint circa 1685. Following the outbreak of King Williams's War (1689-97), there was renewed interest in the English Empire in America, and it is likely that Morden created this map to satiate British hunger for new information.

Numerous Jesuit and French sources (including maps by Dablon and Thevenot) served as the basis for information on the Great Lakes, Canada and the Mississippi Valley. A number of exaggerated islands fill Lakes Superior, Huron, Nipigon, and James Bay. In the Southeast the features of John Lederer's 1672 map (A Map of the Whole Territory Traversed by John Lederer) is seen, including Ashley Lake, the Large Savana, and the Desert Arenosa. The boundary lines of the colonies are also quite interesting. Pennsylvania extends northwest beyond Lake Erie, and New York is not separated from New Jersey. The boundaries of the southern colonies are either omitted or haphazardly drawn.

Off the eastern seaboard is a large inset map of the North Atlantic showing the eastern part of North America and the West Indies, as well as the coastlines of Europe and Africa. Adjacent to the title cartouche is a small inset of Boston and vicinity, which represents the most recent information incorporated into the map, and was based on Thomas Pound's A New Mapp of New England from Cape Codd to Cape Sables, published in 1691.

This is the first state according to Burden, with the imprint of Christopher Brown added below the title cartouche and odd-numbered coordinates of longitude.

Original outline color that has been refreshed with light soiling. Fully and expertly backed in tissue to repair several separations along the centerfold, a 1" tear just east of the Chesapeake Bay, and some cracks caused by the oxidation of the green pigment. Professionally remargined on all sides with the leafcasting method, also repairing a number of small chips and tears entering the borders with a small amount of image seamlessly replaced in facsimile. An expertly restored example that presents itself well.