One of the Earliest Available Maps of Pakistan and Afghanistan 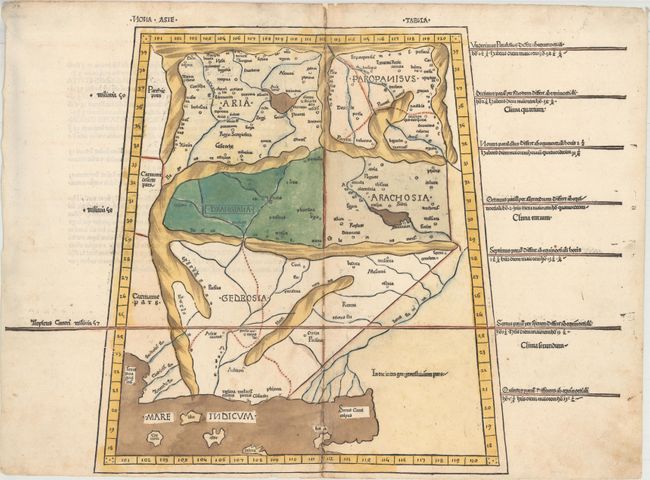 This striking woodblock map provides a Ptolemaic view of the region of present-day Pakistan, Afghanistan and northern India within a trapezoidal border. The historic regions of Gedrosia, Drangia, Aria, Paropanisus, and Arachosia are prominently located with their rope-like mountainous boundaries. Latin text on verso.

Donnus Nicolaus Germanus was a Benedictine monk, cartographer, and printer who served as the editor of the 1482 and 1486 editions of Cosmographia. In addition to editing Jacobus Angelus's Latin translation, he also corrected and improved the maps. Printed for Justus de Albano de Venetiis by Johann Reger from the same blocks as the first edition, with new headings over the maps and reset Latin text on verso. According to Nordenskiold, the 1486 edition of the atlas is significantly rarer than its predecessor.

A nice impression with minor soiling and professional repairs to some binding holes and separations along the centerfold, as is common with this edition. Remnants of hinge tape on verso.