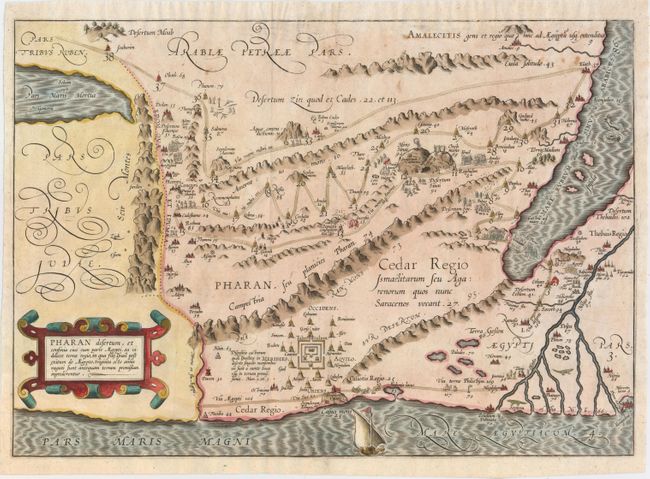 Oriented with north to the left, this map shows the Exodus and the wandering of the Children of Israel. The map depicts the Desert of Pharan, extending to the Dead Sea in the North, the Gulf of Suez in the south, and Egypt and the Nile River Delta in the west. Numerous biblical sites identified by both name and number, which are more fully described in Adrichom's text. Mount Sinai is shown with Moses at the top and the Children of Israel at the bottom, dancing around the Golden Calf. The Tabernacle is depicted at the bottom center of the map, surrounded by the encampment of the tribes.

The Theatrum Terrae Sanctae was an atlas and history of the Holy Land and was Adrichom's most important and famous work. Born in Delft, Christian Kruik van Adrichem, or Christianus Crucius Adrichomius, was a Catholic priest and theologian. Adrichom worked for thirty years on his three-part history of the Holy Land, and only succeeded in publishing the first part, Urbis Hierosolyma Depicta, during his lifetime. The remaining two parts were published posthumously by Georg Braun in 1590, with subsequent editions in 1593, 1600, 1613, 1628, and 1682. The Theatrum Terrae Sanctae contained 12 maps and plans: one of the Holy Land, nine of territories of the Tribes of Israel, one of the Exodus, and a town plan of Jerusalem.

A fine impression on watermarked paper with attractive color and a few faint spots of foxing.