Rare Chart of the Battle of Portobello

"This Plan of the Harbour, Town and Forts of Porto Bello...", Durell, Philip 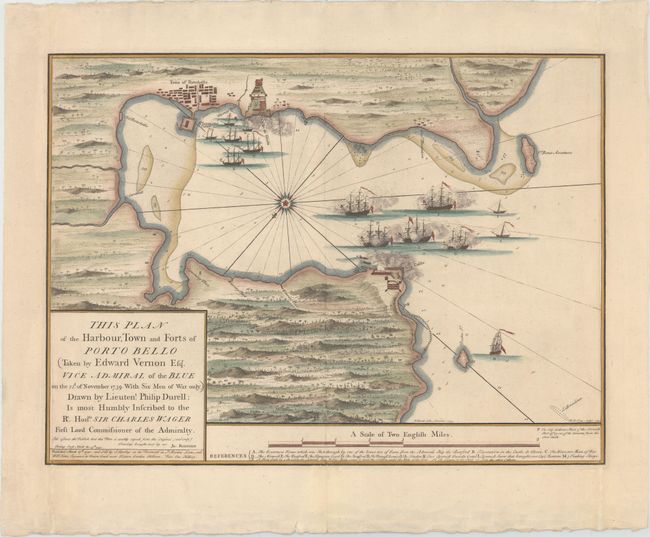 This rare chart depicts the Battle of Porto Bello (or Portobelo), a conflict between Britain and Spain during the War of Jenkins' Ear, part of the War of the Austrian Succession. Portobelo was a strategic Spanish transfer point for gold and silver coming from South America. After taking part in a failed attempt to capture a fully laden Spanish treasure ship departing from Portobelo in 1727, Vice Admiral Edward Vernon made claims that he could capture the historic port with just six ships. In November 1739, Vernon organized a squadron of six ships to capture the settlement. Due to strong easterly winds, Vernon was initially forced to focus his efforts on the harbor fort (here labeled Iron Castle). The British caught the Spanish off guard and quickly gained control, forcing the Spanish to surrender the fort. Subsequently, Vernon shifted his efforts to the town of Portobelo, resulting in Spanish surrender of the port. The capture of Portobelo was seen as a big triumph in Britain and America, and the names Portobelo and Vernon were used in commemoration (including Portobelo Road in London, the Portobelo district of Edinburgh, and Mount Vernon in Virginia, the home of George Washington). The British occupied Portobelo for only three weeks, destroying the fortress and key buildings before withdrawing.

This chart locates Iron Castle on the point, engulfed in smoke, with the six British warships firing upon the fort. The town of Portobelo is presented in a simple block pattern, with the fortified Castle de Gloria adjacent to the town, and Spanish ships guarding the nearby waters. The surrounding countryside is filled with hills and vegetation. A compass rose in the center of the bay orients north to the bottom right of the chart, and the bay is filled with notations of depth soundings, rocks and shoals. A lettered key identifies the ships and key locations throughout the chart. The map is dedicated to Sir Charles Wager, who was First Lord of the Admiralty between 1733 and 1742 and was partially responsible for appointing Vernon to command the Jamaica Station. The map was drawn by Lieutenant Philip Durell and brought back to England by Captain James Rentone. Durell made several other maps of the Caribbean region during the war, all of which are rare. Engraved by William Henry Toms and published by Samuel Harding. Separately issued.

A nice impression with attractive color and wide, original margins. Extraneous vertical creases along the left and right neatline have been pressed flat and archivally reinforced on verso. Two small worm tracks that just touch the neatline at bottom center have been professionally infilled.