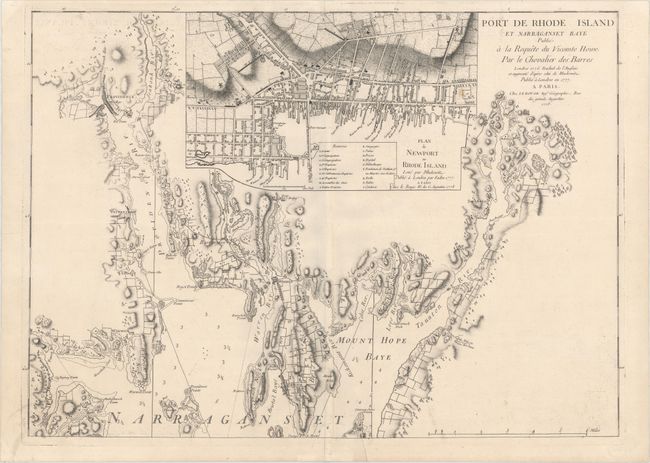 This important and scarce, Revolutionary War period chart is based on the third of Des Barres' charts of Narragansett Bay, which in turn was based on a Charles Blaskowitz manuscript "A map of the bay of Naraganset with the islands, therein and part of the country adjacent." This is the northern sheet of the two-sheet map. The map details the area locating Providence, Warwick, Potowoom, Bristol, Warren, Barrington, Swansea, and the extensive and tortuous waterways in the region. It locates roads, individual structures, mills, a college (Brown), hills, and even stone wall field boundaries. Soundings in the bay are noted in fathoms. The large inset map of Newport is even more detailed and displays the street layout with individual structures on each block shown. Titled "Plan de Newport en Rhode Island…" it was taken from another Blaskowitz manuscript map: "A plan of the town of Newport in Rhode Island..." At the bottom the index locates and names 18 public buildings including the Touro Synagogue, which is the oldest standing synagogue in the US. The plan locates two windmills in Newport include the now famous Newport Tower. Blaskowitz conducted his surveys under the direction of Samuel Holland, Surveyor General for the Northern District of North America. While neither Des Barres nor Le Rouge attributed their geography to Blaskowitz, the following year William Faden published the surveys in his name.

A nice impression on watermarked paper with a couple of insignificant spots, faint offsetting, and a printer's crease at bottom.