"A New Discription of Carolina by Order of the Lords Proprietors", Moxon/Ogilby 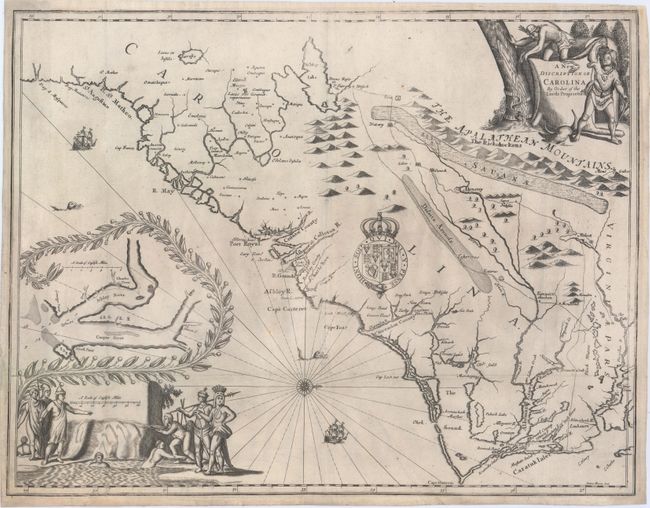 The first few printings of John Ogilby's America contained Montanus' map of the Carolinas, which was based on Blaeu's map circa 1638. Once it was resolved that America would be used as a promotional tool to encourage settlement in Maryland and the Carolinas, Ogilby decided that new maps of these two areas were required. Ogilby relied on numerous sources to ensure that his map of the Carolinas was the most up-to-date, including John Lederer, William Hilton, Robert Sandford, John Culpeper, and the Ashley-Cooper manuscript map (as evidenced in the inset map at far left). The interior of the map was heavily influenced by Lederer, including several misconceptions, such as the large lake named Ashley Lake, the Savanae (savanna) running the length of the Apalathean Mountains, and a desert named Deserta Arenola. It was chiefly through this popular map that Lederer's errors became quickly disseminated and so widely copied.

Drawn and engraved by James Moxon, the map is also significant for the first appearance of the Pamlico (Pemptico) River and the Pasquotank (Paskotank) River. Despite the misconceptions copied from Lederer, the map presented a great improvement over previously published maps of the region. It served as the basis of Francis Lamb's map published in the final edition of Speed's Prospect… in 1676, as well as numerous other maps for another 30 years, despite the publication of Gascoyne's Second Lords Proprietors Map in 1682.

Oriented with north to the right, this scarce map is splendidly embellished with a title cartouche featuring two Native Americans, a distance scale surrounded by a group of natives, the arms of Charles II, a compass rose, ships and sea monsters. First published in Ogilby's America, the map was later included in a promotional tract by Samuel Wilson (the proprietor's secretary) titled An Account of the Province of Carolina in 1682, and was likely issued separately as well.