"A Map of the Internal Provinces of New Spain", Pike, Zebulon 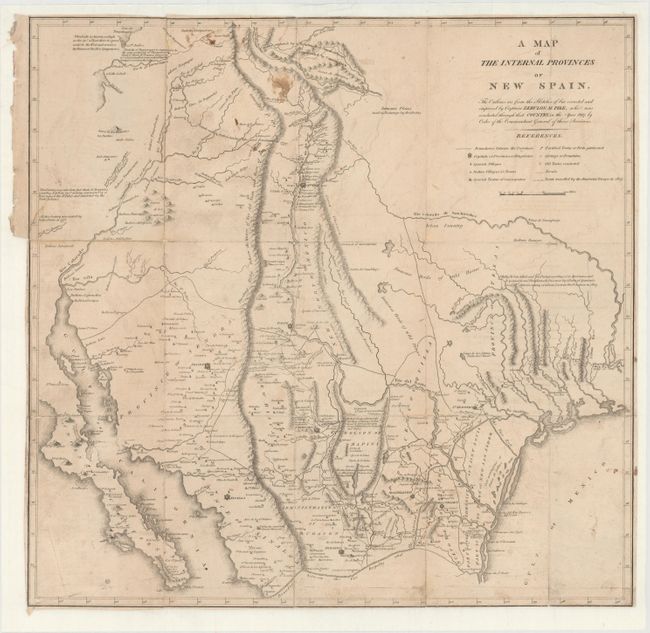 Publication: An Account of Expeditions to the Sources of the Mississippi...

This map was included in Pike’s landmark report of the Southwest, describing his expeditions from 1805-1807. His book is one of the most important of all American travel narratives, and stands alongside those of Lewis and Clark as a cornerstone of early western exploration. The report itself (not included) contains accounts of Pike's travels to find the headwaters of the Arkansas and Red Rivers, his explorations along the Mississippi River, and his Spanish escort to Santa Fe, New Mexico and Chihuahua, Mexico.

Contained within the report are six maps including this one focused on the Southwest and much of what is now Texas, New Mexico, Arizona, southern Colorado and northern Mexico. Shown are boundaries between provinces, capitals of provinces or kingdoms, Spanish villages, Indian villages or towns, Spanish towns of consequence, fortified towns or forts garrisoned, springs or fountains, old towns excavated, roads, and the route traveled by Pike’s troops in 1807. Additional features include the locations of numerous ranchos, mines, and notations such as "Immense herds of wild horses," "Immense plains used as pasturage by the Cibolas," and Indian tribe names.

Issued folding and now flattened and backed with heavy tissue to extend the narrow margins and to reinforce and repair numerous short and long fold separations. Light soiling and offsetting.