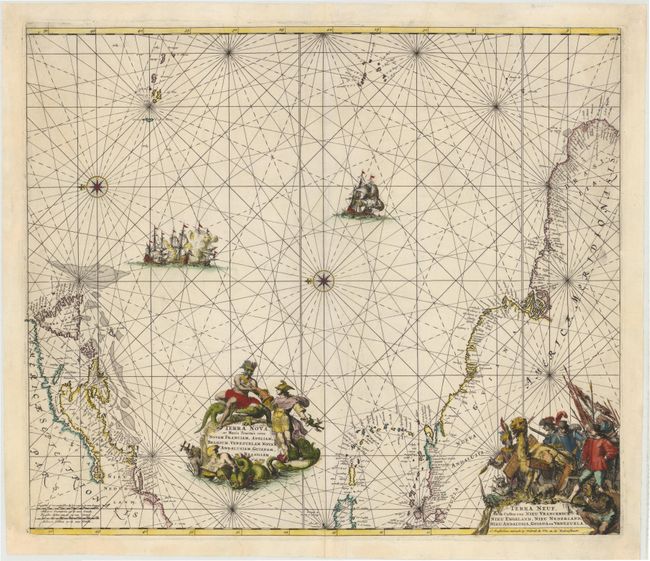 Magnificent sea chart of the western Atlantic Ocean showing the coastlines of North America from Cape Charles, Maryland to Newfoundland, and the West Indies to the northern coast of Brazil. The chart is based on that of Theunis Jacobsz, circa 1650, with few changes except for an improved (although still rudimentary) depiction of the Chesapeake Bay. Oriented by two compass roses with north to the left; the Azores and Cape Verde Islands are at the top of the map. It is richly decorated with two large cartouches with the title in Latin and Dutch. The central cartouche is surrounded by Mercury, a native riding an alligator, mermen and sea monsters. The corner cartouche with Dutch title features figures of explorers, natives, and exotic animals, including an armadillo. In the sea are sailing ships, including a raging sea battle, rhumb lines and two compass roses. This is the first state, with page 22 at top right.

First published circa 1675, de Wit's sea atlas, Orbis Maritimus ofte Zee Atlas, contained 27 charts from the North Pole to North and South America. The charts all appear to have been engraved by Romain de Hooghe and are splendid examples of Dutch marine works. The atlas was reprinted with amendments by Louis Renard in 1715, by Reinier and Josua Ottens in 1739 and 1745, and finally by the widow of van Keulen in 1802.

A nice, dark impression with a few small spots of printer's ink residue. There are professional repairs to a centerfold separation that enters 1" into map at bottom, a 1" separation along the upper centerfold only visible when held to light, a small hole and tear in Brazil, and a number of small tears and chips in blank margins.