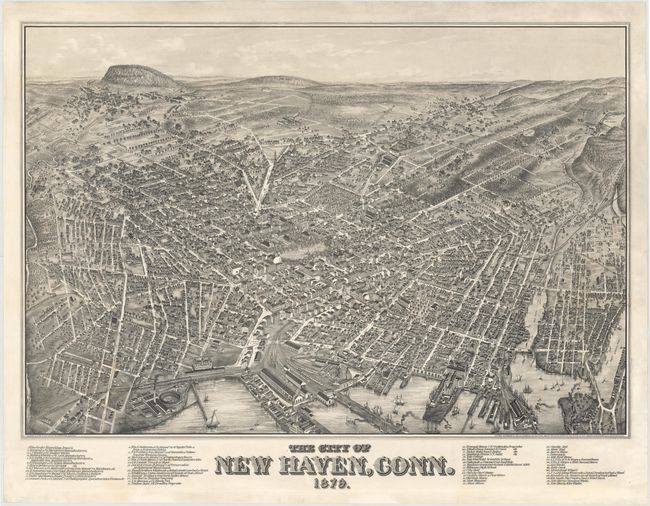 This striking bird's-eye view of New Haven depicts the growing city from New Haven Harbor, centered on the New Haven Green. The city, rich with colonial history, is depicted about 15 years after the Civil War. The war boosted the economy of New Haven with the purchases of industrial goods, in large part due to the New Haven Arms Company, which had armed numerous Union soldiers during the war. After the war, the New Haven Arms Co. was reorganized and renamed the Winchester Repeating Arms Company, which is shown at top right. This view, conceived by Oakley Hoopes Bailey, shows the far ground tilted slightly towards the viewer, resulting in greater visibility of the entire area. Bailey's precise technique allows minimal distortions and succeeds in highlighting both the topography of the land and the cityscape. An index appears on both sides of the title, locating 51 points of interest, including the various buildings of Yale College (adjacent to the Green), city hall, the post office, the state hospital, the railroad roundhouse, the steamboat wharf, and numerous local businesses.

Born in Ohio, Bailey was a skilled artist in creating panoramic maps, and produced about 375 views during his career, spanning 56 years. After settling in Cambridge, Massachusetts in 1875, Bailey focused his work on towns in Connecticut, Rhode Island, and Massachusetts. Bailey's views are celebrated for their careful drawings and detailed indices offering a wealth of information on architectural and business information. Although Bailey published some views entirely on his own, he often collaborated with others, including his older brother, Howard Heston Bailey, and his brother's business partner, James Compton Hazen. In addition to this view of New Haven, Bailey worked with Hazen on almost 50 views during their association from 1877-79.

This view is extremely rare - we have only found 5 examples in WorldCat, and no examples of any sales on record.

A fine impression with expert repairs to several tears in the image, extending between 2" and 9" into image, and additional tears and chips in blank margins. The top margin has been professionally extended to accommodate framing. Professionally backed in Japanese tissue due to the fragile nature of the paper on which it was printed.