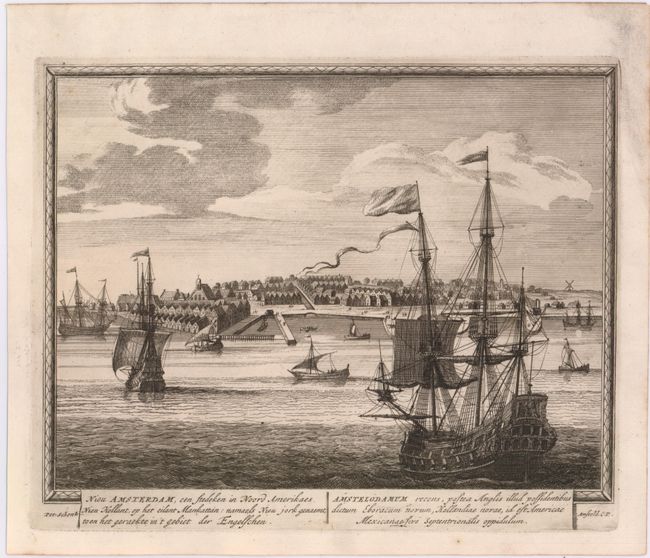 This extremely rare view appeared in Schenk's book of town views from around the world. Of the 100 town views included in the book, only 10 were related to the Americas. The view depicts the Dutch settlement of New Amsterdam, located on the southern tip of Manhattan. The Dutch first settled in the area in 1626 after purchasing the island from the Indians for $24. A fort was erected on the tip of the island to protect the Dutch East India Company's fur trade in the area. In 1664 New Amsterdam was captured by the British and renamed New York, in honor of James, the Duke of York. During the Third Anglo-Dutch War, the Dutch regained control of the city in July 1673 and renamed it New Orange. However, after signing the Treaty of Westminster in November 1674, the Dutch ceded the city to the English, who reverted the name back to New York.

Schenk's view is copied from the "Restitutio" view, which can be found on maps by Allard, Ottens, Seutter, and Seller. The "Restitutio" view depicts New Amsterdam as it appeared shortly after the recapture of the city by the Dutch in 1673. The settlement is viewed from the harbor and is filled with numerous wooden buildings, a large church, a canal and a pier. The fort can be seen at far left, with a raised flag and tiny cannon. At far right is a windmill. The view is encased in a lovely picture-frame style border, with the title in both Dutch and Latin below. The title briefly references the history of the city: "New Amsterdam, a city in North America's New Holland, on the island Manhattan, newly renamed New York, and finally ceded to the English again."

Pieter Schenk was born in Elberfeld, Germany in 1660, and moved to Amsterdam when he was 15 to become a student of Gerard Valck. Schenk married Valck's sister in 1687, and the two brothers-in-law later went into business together. Valck and Schenk purchased some of the copperplates from Jan Jansson and also published several important maps and atlases together, including Atlas Contractus in 1705.

A fine impression with marginal soiling.