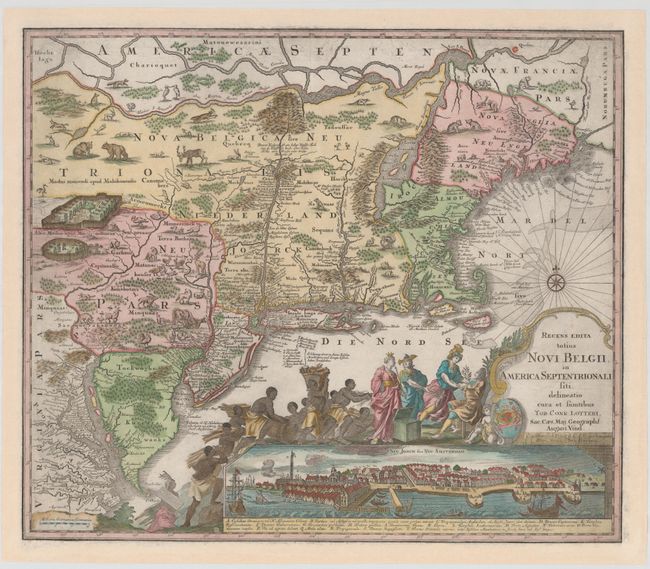 This dramatic map is Seutter's version of Allard's map, Totius Neobelgii Nova et Accuratissima Tabula. It includes a faithful rendition of the famous Restitutio View of Manhattan, which originally commemorated the short-lived Dutch recapture of New Amsterdam in 1673. The view depicts the town as seen directly from the east. On the right is a wall that eventually became Wall Street with its guardhouse and gate. Adjacent to the wall are new settlements and the Collect Pond (P), used to collect fresh water. Seutter's version has updated the scene above the view to reflect the British colonization. A long procession of natives carry American goods to the English monarch, presumably George II, who is being attended by Hermes, god of commerce, Athena, goddess of wisdom, and Hera, who is standing over a chest of coins.

The map itself is from the influential Jansson-Visscher series, which formed the basis for the mapping of the Atlantic seaboard and New England for nearly one hundred years. The cartography follows Visscher's modifications and includes much new information reflecting the Anglicization that had occurred during the period of English rule. Lacus Irocoisiensis (Lake Champlain) remains radically misplaced to the east of the Connecticut River, the St. Lawrence River and Ottawa River are intertwined, and the coast of New England is still imperfectly mapped. The Delaware River is shown separated from the Hudson River. The map shows the locations of many native tribes, including two fortified native villages. A wide variety of animals are illustrated throughout the map, more than in the Allard version, with the addition of domesticated cows and chickens as well as elk, bear, fox and wild turkeys. This is the fifth state with Lotter's name added to the cartouche and Boston replacing Briston.

A nice impression with a few minute worm holes only visible when held to light and a couple of professionally repaired tears that just enter map border. Expertly remargined on all sides, with a minor amount of neatline in facsimile.