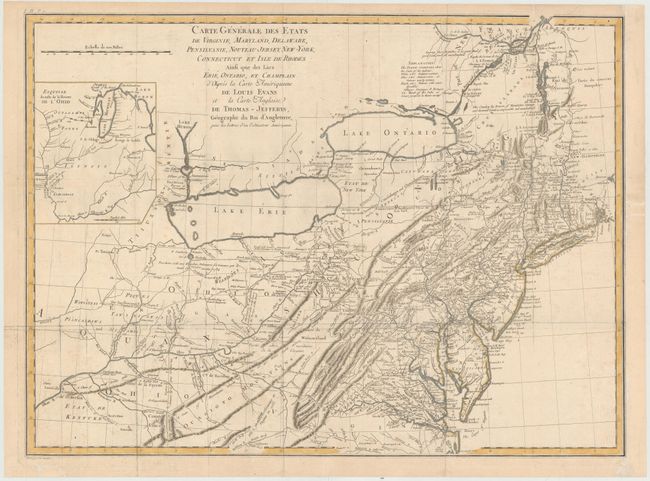 This is an updated French edition of Evans' rare and important map of the Middle Colonies that was first published in 1755. It was produced for St. John de Crevecoeur's book and includes some additions in New England, but fewer than the extensive additions of Pownall's 1776 reissue, according to McCorkle. Engraved by Pierre Francois Tardieu.

Highly detailed, the map covers the frontier, not just the better known populated areas of the states. It extends to include Lakes Ontario and Erie, and the St. Lawrence River to Montreal. The map randomly uses French or English for the scores of place names, while most notations and the legend are in English. A large inset at upper left "Esquis se duresse de la Riviere de l'Ohio" shows the course of the Ohio River to the Mississippi and up to Lakes Michigan and Huron. The French had better knowledge of the Great Lakes area as evidenced by additions on this map not found on the original Evans. For example, the Portage of Chikago, Fort Erie, and St. Louis are shown and the Niagara River valley contains more detail of the watershed in the region. De Crevecoeur also included updated information in New England particularly in Vermont, where Dartmouth College, Putney, Bennington & Westminster are located. Kentucky is erroneously named as a state and there are early references to important cities in the region - Louisville, and Leestown, which was the first Anglo-American settlement on the north side of the Kentucky River and is now part of Frankfort. The map names Indian tribes and a legend explains their status: Extinct; Nearly extinct; and those that are Still considerable.

Crevecoeur was a French-born surveyor who settled in New York, where he produced this classic collection of twelve essays that reflected on the nature of American life, particularly its customs and manners. His description of bountiful American lands spurred many French people to immigrate to America. Howes says that Crevecoeur's work is a: "Description of American life of great influence in attracting European immigration in the post-revolutionary period. As literature unexcelled by any American work of the eighteenth century."

Issued folding and now flattened on watermarked paper with a few edge chips and tears confined to the blank margins repaired on verso with archival material and light printer's ink residue. Professionally remargined at right to better accommodate framing.