Arrowsmith's Important Map of the Republic of Texas

"Map of Texas, Compiled from Surveys Recorded in the Land Office of Texas, and other Official Surveys", Arrowsmith, John 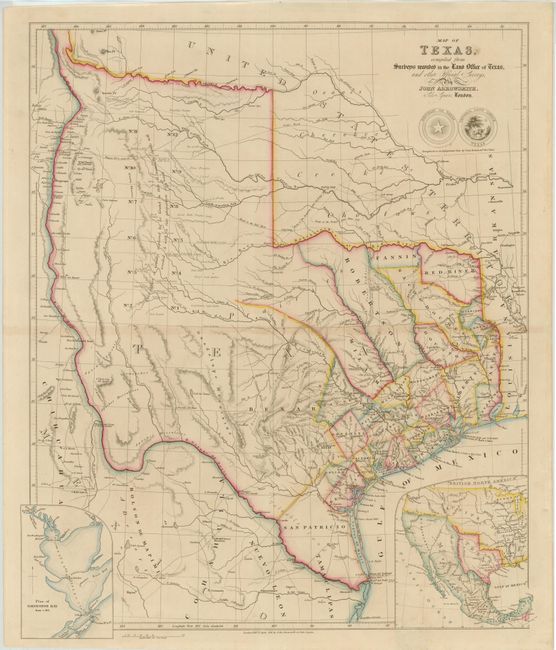 The Republic of Texas was a sovereign state in North America from 1836 to 1845. It was formed as a break-away republic from Mexico by the Texas Revolution. The nation claimed a large region that included all of the present state of Texas together with part of the former Mexican region of New Mexico (parts of present-day New Mexico, Oklahoma, Kansas, Colorado, and Wyoming). The eastern boundary with the United States was defined by the Adams-Onís Treaty between the United States and Spain, in 1819. Its southern and western-most boundary with Mexico was under dispute throughout the existence of the republic, with Texas claiming that the boundary was the Rio Grande, and Mexico claiming the Nueces River as the boundary.

This is the second edition of this scarce and important map of the Republic of Texas, published only two months after the first edition. Arrowsmith's map was likely the first to show the full extent of Texas' claim to the upper Rio Grande valley, an area that would remain a part of Texas until the Compromise of 1850. It is also one of the earliest maps to contain information from the General Land Office of Texas with the delineation of pioneer county development and land grants, including those for Castro, Kennedy, Pierson, Fisher and Bourgeois d'Orvanne. The map provides an accurate depiction of boundaries, river systems, Indian tribes, and major roads. The many details include the Waggon Rd. to Santa Fe, the Presidio Road, the Commanche Road, and the road to the Red River, which included along its way a Sick Camp and the grave of General Leavenworth. The arid western region purportedly explored by Le Grand in 1833 contains a note that the expansive area is naturally fertile well wooded & with a fair proportion of water; an erroneous remark that appears in this region on maps throughout much of the nineteenth century. This region is embellished with additional notations designed to promote immigration, such as valuable land, rich land, beautiful prairie, and delightful country. At bottom are two insets; a plan of Galveston Bay and a map of North America showing the relationship of Texas to Mexico and the United States. Only the second and third states include the inset of Galveston Bay, and show the full extent of republic's claim to the headwaters of the Rio Grande. Below the seals of the Republic of Texas and the Texas General Land Office is the announcement, Recognized as an Independent State by Great Britain 16th Novr. 1840. At the lower neatline is the imprint London, Pubd. 17 April, 1841. by John Arrowsmith, 10 Soho Square. This second state from the London Atlas is very uncommon. This state was also published in William Kennedy’s The Rise, Progress and Prospects of the Republic of Texas, while most atlases contained the third state.

Original outline color with very light toning along centerfold and a small spot in title. A 1/2" tear and abrasion in top border has been professionally repaired with a minor amount of border in facsimile. There is a small area in bottom blank margin, extending 1/4" into inset at bottom right, where a stain was removed, with minor retouching of border.