"Map of Texas from the most recent authorities", Mitchell, S. A. 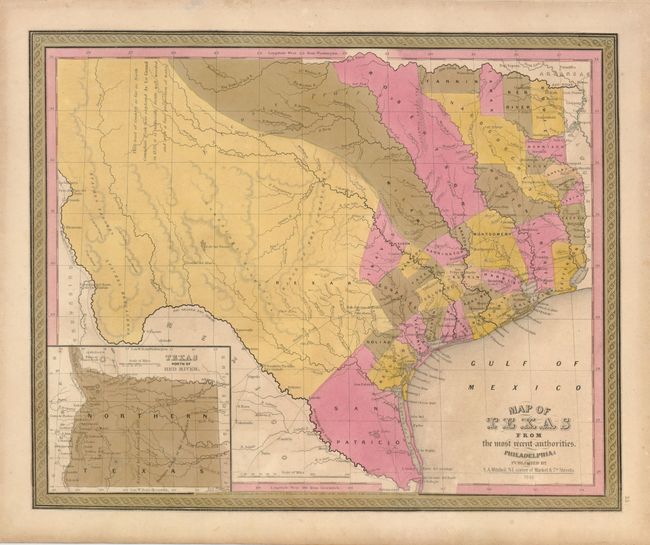 This superb map of the state of Texas was issued shortly after the state's annexation to the United States. Copyrighted the year before by C.S. Williams, this is the first edition published by Mitchell with his address at the N.E. corner of Market & 7th streets in Philadelphia. The map portrays early county configurations such as Robertson and Milam, extending from central Texas northwestward to the Red River; San Patricio, extending from the Nueces to the Rio Grande; and Bexar, comprising all lands to the southwest and west along the Rio Grande and northwards into the present panhandle. The panhandle in an inset is titled, "Texas North of the Red River" at lower left. The panhandle extends north to the Green Mts., just west of Pikes or James Peak in present-day Colorado, and west to the Rio Grande River, thus incorporating Santa Fe and Taos. There is a comment taken from Arrowsmith's 1841 map in West Texas that the area "as far as North Canadian Fork was explored by Le Grand in 1833, [and] it is naturally fertile, well wooded, and with a fair proportion of water." Several early roads are depicted including the Presido Road, and Fort Alamo, mines, and the presidios of Rio Grande, del Norte el de las Yuntas, del Paso del Norte are identified. The map includes many early settlements including Orozimbo, Bolivar, Qintana, Liverpool, De Kalb, Boston, Dangerfield, Smithland, Pulaski, Teran, Belgrade, Salem, Zavala, and Aurora, to mention only a few.

Original color with minor toning, mostly in the margins.