"To the Right Honourable Charles Earl of Peterborow, and Monmouth, &c. This Map of Africa, According to ye Newest and Most Exact Observations Most Humbly Dedicated by Your Lordship's Most Humble Servant", Moll, Herman 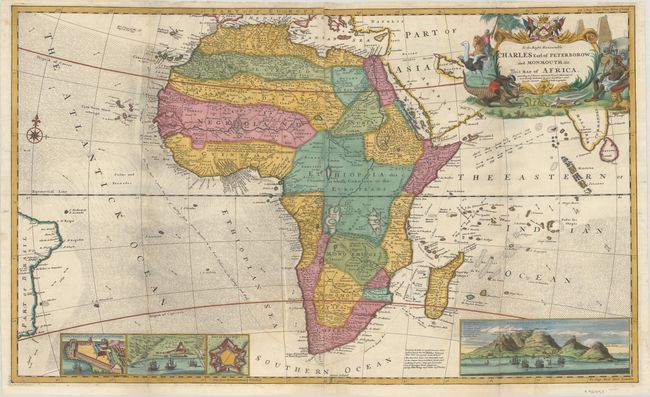 This spectacular and immense map of Africa on two joined sheets contains a wealth of detail and information typical for the time. The map shows the whole continent as well as Madagascar, portions of the coast of Asia, Ceylon, India, and Brazil. The map is inset with a view of the Cape of Good Hope, showing the bay filled with ships, Table Mountain and a key to the locations noted. The three other insets include Cape Coast Castle on the Gold Coast of Guinea, James Fort on St. Helena and a plan of the Fort of Good Hope. There is a wonderful note in Guinea, as follows: I am credibly informed that ye country about 400 leagues North of the Coast of Guinea is inhabited by white Men, or at least a different kind of People from the Blacks, who wear Cloaths, and have ye use of Letters, make Silk, and that some of them keep the Christian Sabbath. The old sources of the Nile, Lakes Zaire and Zaflan, have been turned into swamps and are no longer connected to the Nile. The sea is filled with indications of currents, as well as a good route to take to the East Indies from England. Decorated with a lovely compass rose and a cartouche that has a native wrestling a crocodile, an ostrich, two battling snakes, a lion and an elephant. The imprints of Moll, John Bowles, Thomas Bowles, Philip Overton and John King appear at bottom right. Printed on two sheets, joined.

A sharp impression on bright sheets, issued folding and now flattened with very light soiling and professional repairs to some separations and small holes along the folds, with a minor amount of the image replaced in facsimile.