Unrecorded State Prior to the Addition of Louisiana

"A Map of the United States Including Louisiana", Darby, William 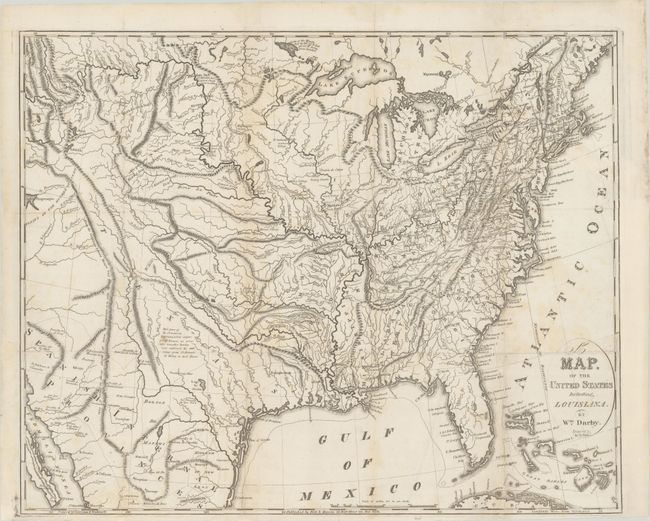 This is an unrecorded, early state of William Darby's map of the United States with the title being the only appearance of the name "Louisiana" on the map and Texas extending west of the Rio Grande River. This map was later published in Darby's The Emigrant's Guide to the Western and Southwestern States and Territories... (1818) with "State of Louisiana" added to the map, Texas moved east of the Rio Grande, and hand coloring delineating the states, Texas, and the Spanish Provinces. The map, and subsequently the guide, was created to encourage emigrants to travel west of the Mississippi River. In this edition, the northern borders of Louisiana, which had become a state in 1812, are delineated with dashed lines, with the remaining borders marked by the Mississippi and Sabine Rivers, but the state is not yet labeled. Texas is labeled with large letters, similar in stature to that of "Spanish Internal Provinces," although the borders of Texas remain ambiguous. In the 1818 edition of this map, Texas is delineated by color in an unusual, early "stovepipe" configuration with a narrow panhandle trailing northwesterly into the Rocky Mountain region, bounded by the Rio Grande in the west and the Red River in the north. In this early state, however, the "T" of "Texas" is positioned west of Rio Grande River, and the "E" is south of Santa Fe rather than east of the city. A note located in the interior portion of Texas states that "this part of the Provincias Internas is but imperfectly known; no scientific traveller having ever explored, the wide range from St. Antonio de Behar to Red River." The Missouri Territory is named, but not delineated, and appears confined along the western bank of the Mississippi River. There are numerous spurious mountain ranges stretching throughout the United States, and the locations of a number of Native American Indian tribes are also noted. Engraved by James D. Stout and printed by Harrison & Bushworth. This is the only example of this state of the map that we have been able to locate.

A nice impression, issued folding and now flattened with light soiling. There are professional repairs to a number of separations along the folds and to a binding tear that extends 5" into the image at top right. The binding trim at right has also been professionally replaced.