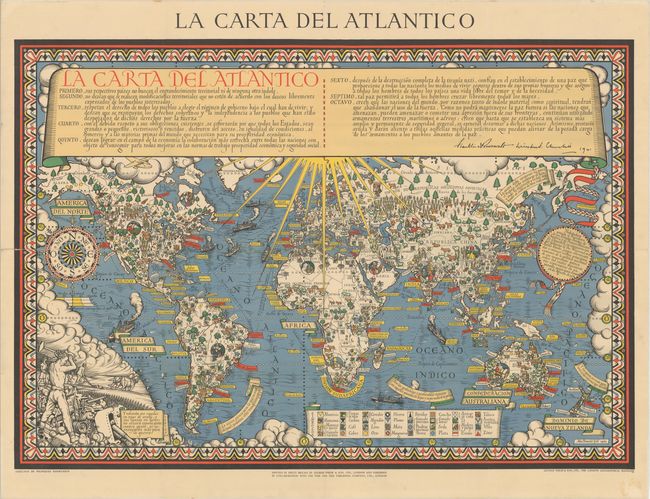 This Art-Deco inspired map by Leslie MacDonald Gill was originally commissioned by the Time & Tide magazine to commemorate the Atlantic Charter and to help boost British morale during World War II. Four months before Japan bombed pearl Harbor and the United States entered the war, President Franklin Roosevelt and Prime Minister Winston Churchill secretly met on 14 August 1941 aboard a ship in Placentia Bay, Newfoundland, and developed the Atlantic Charter. The objective of the charter was to define principals that would govern nations in a post-war world, with the goal of preventing future large-scale conflicts and encouraging global trade. The Atlantic Charter later became the foundation for the United Nations, which was established in October 1945, shortly after the war ended. The full text of the Atlantic Charter is inscribed on a scroll across the top of the map, along with Roosevelt and Churchill's signatures. The Charter radiates rays of hope over the world and the eight Articles of the Charter are illustrated within the map.

The fourth Article of the Charter focuses on natural resources and global trade, and an extensive legend identifies the symbols for various raw materials found on each continent. Additionally, ships and shipping lanes fill the oceans to demonstrate the ease of developing global trade. The sixth Article is a reminder that the war is still waging ("after the final destruction of Nazi tyranny") yet gives hope that peace is on the horizon, as demonstrated by the inspirational quotes of war and peace by Aristotle, Cicero, Emerson, and Pope that fill blank areas of the map. The eighth Article encourages an "abandonment of the use of force," which is graphically depicted in the vignette at bottom left, in which a shirtless worker destroys tanks with a sledgehammer, with an idyllic farming scene in the background. An agrarian culture is further emphasized with round vignettes of local farmers found throughout the map.

Leslie MacDonald Gill (1884-1947), more commonly known as MacDonald Gill or Max Gill, was a British artist, architect, graphic designer and cartographer. He is known for his bold, colorful, Art-Deco style in pieces such as his Wonderground map of the London Underground.

A clean and bright example, issued folding, with tiny splits and holes at fold intersections with minor loss of image, and a 12" split along a fold at left that has been closed on verso with archival tape. There is a bit of old adhesive residue confined to the blank margin at bottom right.