"Chart of South America, Comprehending the West Indies, with the Adjacent Islands, in the Southern Ocean, and South Sea", Jefferys, Thomas 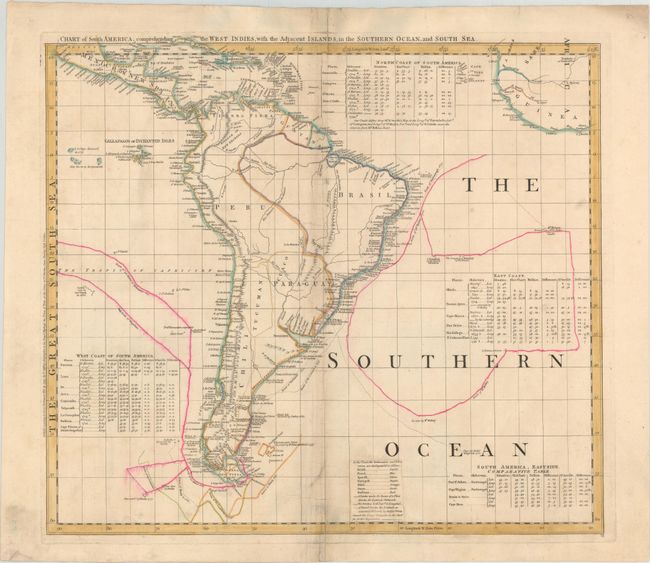 This is sheet VI of a six-sheet map of the western hemisphere known as one of the most important American maps of the latter part of the eighteenth century. The map was compiled in 1753 by Braddock Meade, one of the most intriguing figures in British cartographic history as well as an extremely gifted mapmaker. Working under the alias John Green after serving time for defrauding an Irish heiress, he compiled many of Thomas Jefferys' most important maps. Meade's six-sheet map was created just prior to the
French and Indian War and depicted the extent of the various colonial possessions. In addition, the map was also designed to expose the errors in Delisle and Buache’s map of the Pacific Northwest and was the first map to label the Bering Strait. Of particular interest on the map are the tables of charts that show the variations in latitude and longitude between this chart and those of Bellin, D'Anville, and Popple. There are numerous notations throughout the map that present a fascinating view of the state of geographic knowledge of the period. Each of the six sheets were given full borders and their own title, so that they could be sold separately or combined into a large wall map.

This sheet focuses on South America and extends to include Mexico south of Mexico City, Central America, the Caribbean, the Cape Verde islands, and part of West Africa. The coast of South America is crowded with place names, while inland there is significantly less detail. There is good detail of the rivers, especially the Amazon and Rio de la Plata systems. The Andes span the continents, and a mountain range is shown running through central Brazil into Paraguay. In the oceans, the tracks of numerous explorers are delineated and dated, including Magellan, Drake, Anson, Le Maire and Schouten, and Dr. Halley. In the Pacific, the Galapagos Islands are located, and to the south there is a small coastline of Easter Island labeled Land seen by Capt. Davis in 1686. A color key has been pasted on at bottom that indicates colonial possessions.

Jefferys was the leading English cartographer of the 18th century, serving as both Geographer to the Prince of Wales, and later, Geographer to the King, he had access to the best surveys conducted in America. He published a series of maps of the American colonies that were among the most significant produced in the period, including the Fry/Jefferson map of Virginia, Braddock Meade’s map of New England, and William Scull’s map of Pennsylvania and the western frontier. His successors, Sayer and Bennett, gathered these separately-issued maps together and republished them as The American Atlas. "It was, very likely, consulted by American, English, and French civilian administrators and military officers during the Revolution." (Ristow)

On a watermarked sheet with light soiling and a number of separations and short tears along the centerfold that have been closed on verso with tape.